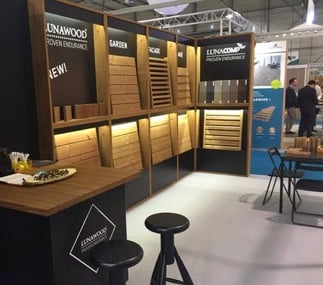 The three-day Carrefour du Bois –tradefair was held traditionally in Nantes France last week. Lunawood took part for the third consecutive time. The fair, held every other year is one of the timber industry’s main events. Almost all European manufacturers, customers and other timber enthusiasts take part. This year the fair gathered 500 exhibitors and around 10 000 visitors from 60 countries.

”Nantes is an institution – as usual everyone was there,” says Sami Kivistö, Sales Manager, Lunawood. There was a wide range of strikes and demonstrations against the government in France during the fair. There was a general worry whether visitors could make the fair as traffic and train connections were affected. “There seemed to be quite a nice crowd regardless,” says Kivistö. “Wood and thermowood as a building material, have become familiar in France so we had a good number of visitors at our stand,” explains Kivistö. Especially factory oiled decking products such as a special strength Deck System –decking line created interest. Deck System, created by Designer Jaana Karell, consists of three different widths which can be combined to make a unique pattern. The line was created especially to suit the needs of design and building professional but can easily be used in private spaces also.