Dream - Lunawood has its roots in the Kärkkäinen brothers' innovation and hard work. - Lunawood

Dream – Lunawood has its roots in the Kärkkäinen brothers’ innovation and hard work.

Dream – Lunawood has its roots in the Kärkkäinen brothers’ innovation and hard work.

It all started with a dream and the empty premises of an old brick factory. The inventor brothers had an idea for a product that could conquer the world. It would not be easy but hard work and entrepreneurship had run in their blood since childhood. Back then, no one could have even dreamed the success this miracle of Iisalmi, Lunawood ThermoWood, would one day achieve.

Commonly known as the Inventor Brothers, Aulis and Olavi Kärkkäinen are originally from Kiuruvesi in the Northern Savonia region. During the recession of the 1990s, Olavi, who had moved to Soinlahti in Iisalmi, saw how the operations of an old brick factory located close to his home were run down. The brothers were interested in the empty premises and the tunnel kiln used for manufacturing bricks, and they decided to buy the property in 1997. Even though the Kärkkäinens are known for their inventiveness, even they could not have imagined the scale of the success story for which they were writing the initial chapters when they first walked through the unused spaces of Iisalmi’s old brick factory, discussing its possibilities.

A brick firing kiln gives rise to a new idea

The brilliant idea was sparked by the brick firing kiln. The Kärkkäinens had heard of a new miracle wood and its production method: wood could be thermally treated to improve its resistance to decay, resulting in a product that absorbs less water than untreated wood.

Originally, the idea was to use the almost 100-metre-long firing kiln for the thermal treatment of wood, enabling operations on an industrial scale from the outset. At the end of the 1990s, Thermowood was not produced industrially anywhere in the world and only small test batches were being planned. During their research into the thermal modification, the brothers realised to their great disappointment that the brick firing kiln was not suitable for the treatment of wood as it was. However, the kiln had already inspired the idea of a continuous multi-step thermo treatment process, which the brothers patented. The work to develop the thermal treatment kiln began in collaboration with a company then called Tekmawood, which later became Jartek. Over the years, Jartek has grown into a top expert in the thermal modification process and kilns. The company still collaborates with Lunawood.

Success built on hard work and a bold attitude

The brothers did not jump straight in with their idea. In the late 1990s, they commissioned a market study to determine the demand for and applications of a toxic-free, dimensionally stable and more damp-resistant wood product. The study indicated clearly that the need for such a product existed and that ‘it would fly off the shelves’, as Olavi Kärkkäinen put it.

The Kärkkäinens decided to change this state of affairs through goal-oriented, determined work, which paid off. To begin with, 16 employees were hired for the factory, a few of whom still work for the company.

Even though the product was brilliant, the brothers were driven and excited for the product clearly existed, the whole project in Soinlahti nearly fell at the first hurdle because of local politics. To begin with, funding or support from local authorities was not forthcoming, and valuable time was lost on funding issues. As a result, other Thermowood companies entered the market first, but they lacked the Kärkkäinen brothers’ skills and passion for developing a technologically advanced product, which was the brothers’ goal from the outset. Even today, particularly on the domestic market, people remember Thermowood’s poor reputation in the early days, which was mostly due to flawed production techniques and poor raw material choices.

The Kärkkäinens decided to change this state of affairs through goal-oriented, determined work, which paid off. To begin with, 16 employees were hired for the factory, a few of whom still work for the company. The opening of the Soinlahti plant was celebrated in a ceremony on 15 February 2002 and in his speech there, Bishop Riekkinen praised the venture for the opportunities it offered locally: ‘An innovation like this is particularly important at a time when so many people have to move elsewhere for work.’ 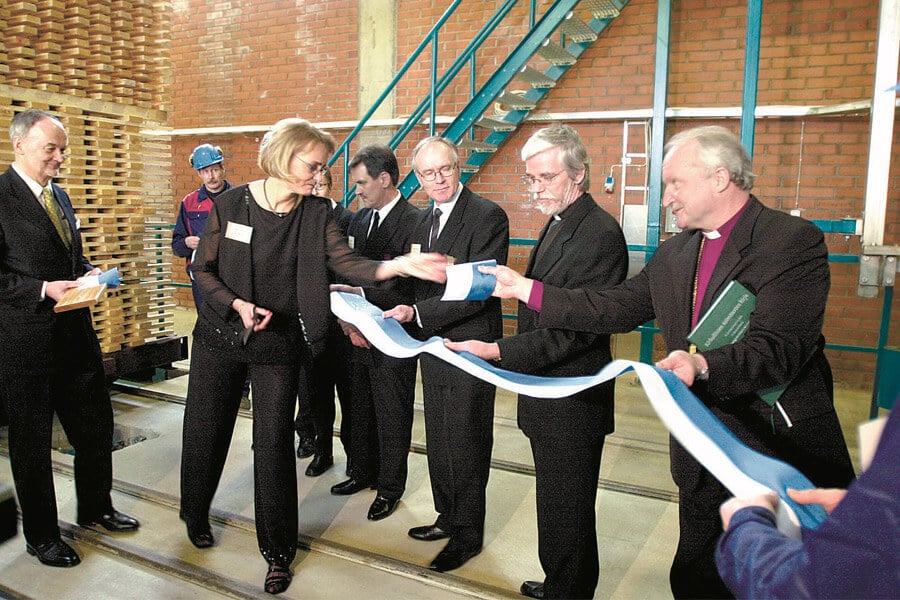 The company’s most important values have always been caring for its employees and ensuring the high quality of its products and customer service. Common efforts were made to market Lunawood and to create a strong, stand-out brand as a high-quality manufacturer. Lunawood’s name combines the Latin word luna, meaning moon, with wood. The story behind the name is as brilliant as the innovation itself. According to old folklore, wood harvested during the full moon contains magical powers and as thermo treatment takes place overnight, the moon lends its magical properties to the finished product. And Lunawood’s product really was miracle wood.

Research and product development as the foundation for growth

The Kärkkäinen brothers and Lunawood held a strong position in the International ThermoWood Association, which was established in 2000 to do the testing and create standards for the new ThermoWood product. Thanks to the Kärkkäinen brothers’ influence, for example two product classes, D and S, were created instead of five. Support from the association alone did not suffice to enhance the reputation of ThermoWood and additional resources were required for marketing both in Finland and internationally, along with the continuous training of employees, the development of processes and hard work.  Besides brand building, the Kärkkäinens believed in the creation of strong products with stand-out features. The product should be such that in addition to offering superior technical properties, it is easy to use and designed for the specific application. Some of the products that are still part of Lunawood’s product portfolio, such as decking boards with concealed Profix fasteners and various battens were created during the period.

Lunawood’s story got off to a flying start and its reputation in Finland grew rapidly, as a result of hard work. In 2007, Kauppalehti Optio business magazine ranked Lunawood #1 on its list of top 100 growth companies of the prior year, with the company’s turnover growing by a whopping 278.2% over five years. With their focus on quality, the brothers wanted the company to be successful and profitable but without compromising on quality or services. They wanted to beat the competition through their passion and strengths, doing things their own way.

There were more innovations to come that would propel the company from strength to strength. In the late 2000s, the brothers heard about a new wood-plastic composite material that outperformed conventional wood as a decking material, because of its easy maintenance. Olavi had the idea of utilising ThermoWood as a component of a composite material, introducing its outstanding qualities into this new product. Lunawood Thermowood Composite, produced in Iisalmi, is still a unique product on a global level, and it holds immense potential in a wide range of applications.

In 2009, Lunawood was invited to participate in Ernst & Young’s Entrepreneur of the Year growth company competition, with the company finishing second. This success boosted the company’s brand image and customer awareness. At the same time, the brothers began to worry about not having anybody within their inner circle to take over the company. They launched discussions on the sale of the company with various operators. Finally, Capman and its funds were selected as the new owner in 2010. 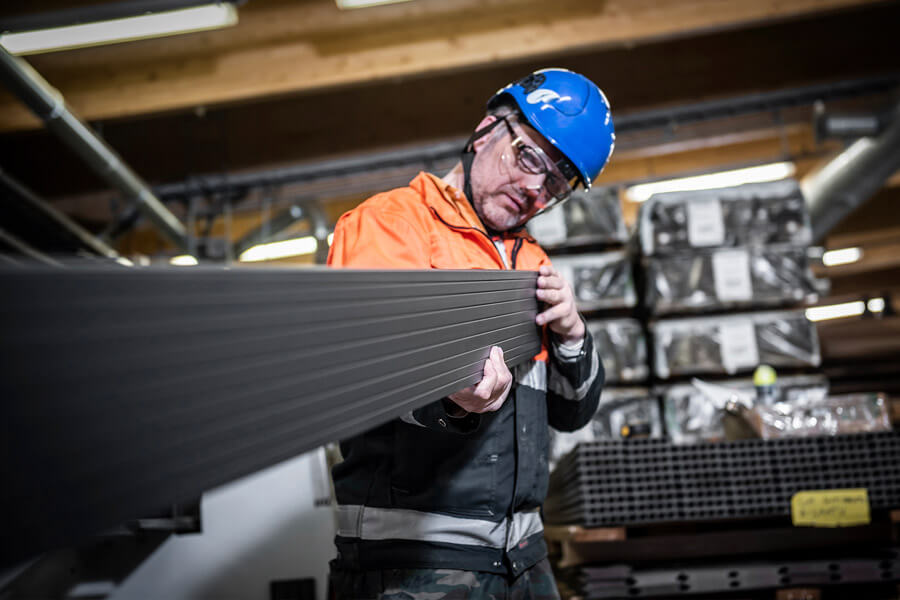 Passionate employees are the key to success

Olavi Kärkkäinen’s recipe for success is simple: be yourself, believe in what you are doing and be passionate and determined. Apply cautious financial policies and allocate your resources to the right areas. The Kärkkäinen brothers believe that a company’s most important resource is its personnel. The company’s management and personnel must be on equal footing and this idea is reflected in Olavi’s comments, such as: ‘The management must be brought from upstairs to downstairs. It wasn’t only once or twice that I put on overalls, and the men were always pleased to see me working alongside them.’

Olavi Kärkkäinen’s recipe for success is simple: be yourself, believe in what you are doing and be passionate and determined. Apply cautious financial policies and allocate your resources to the right areas.

Even today, after 20 years, Olavi’s eyes light up and his voice sounds excited and passionate when he talks about the history of Lunawood. The present Lunawood is rooted in the traditions created by the brothers, which also form the basis of the company’s international success and reputation. The Kärkkäinen brothers deserve praise for their bold and open attitude and huge contribution to the Lunawood ThermoWood. Olavi’s message to Lunawood, which celebrates its 20th anniversary, is this: ‘Remain enthusiastic and believe in what you are doing. Employees are the be-all and end-all. Look after them, motivate them and reward them to foster their passion. Remain innovative in terms of products and the brand.’ 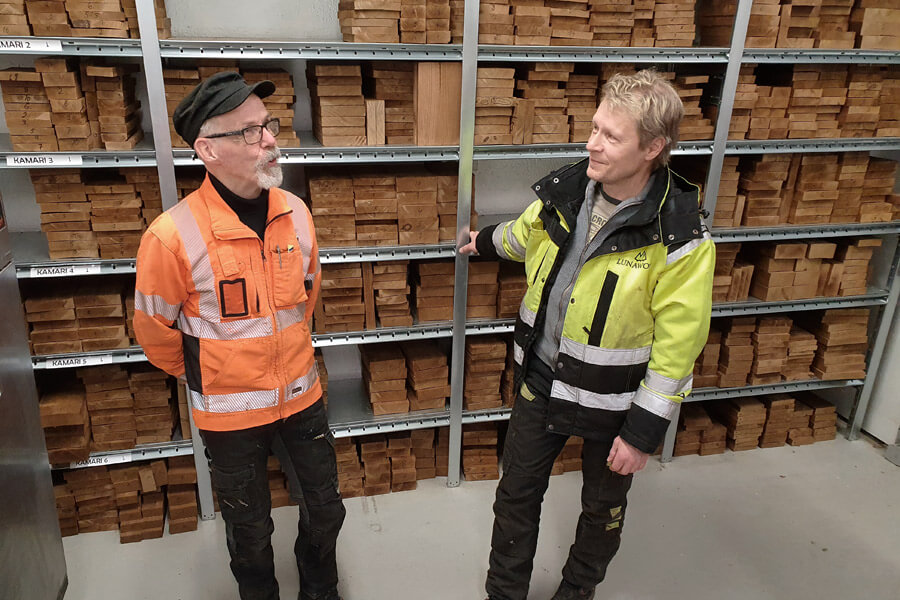 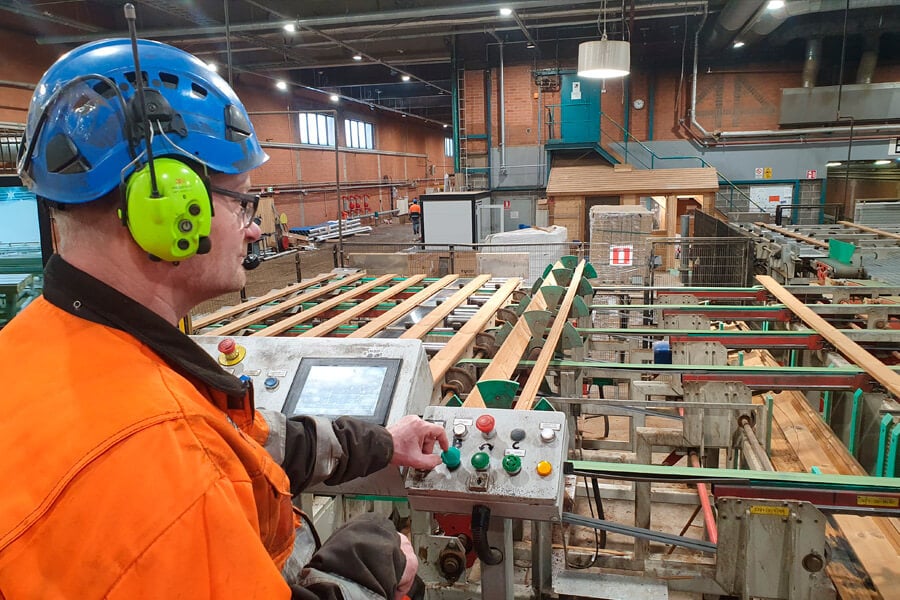 Timo Mähönen has 20 year of experience of planing Thermowood.

This article was written on the basis of background material and an interview with Olavi Kärkkäinen in Soinlahti in Iisalmi on 23 February 2021.