Nursery Savannen – Behind the Design 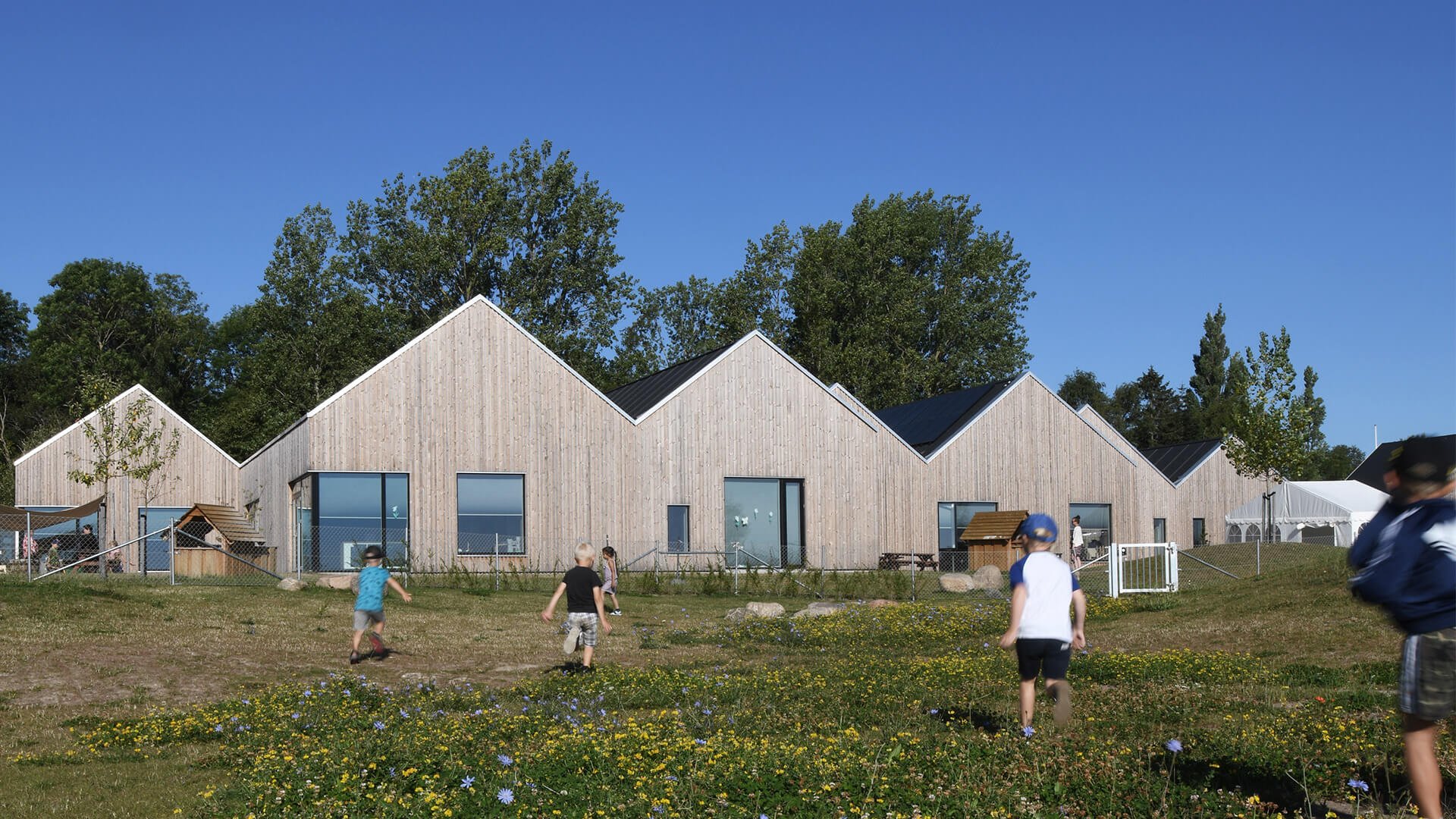 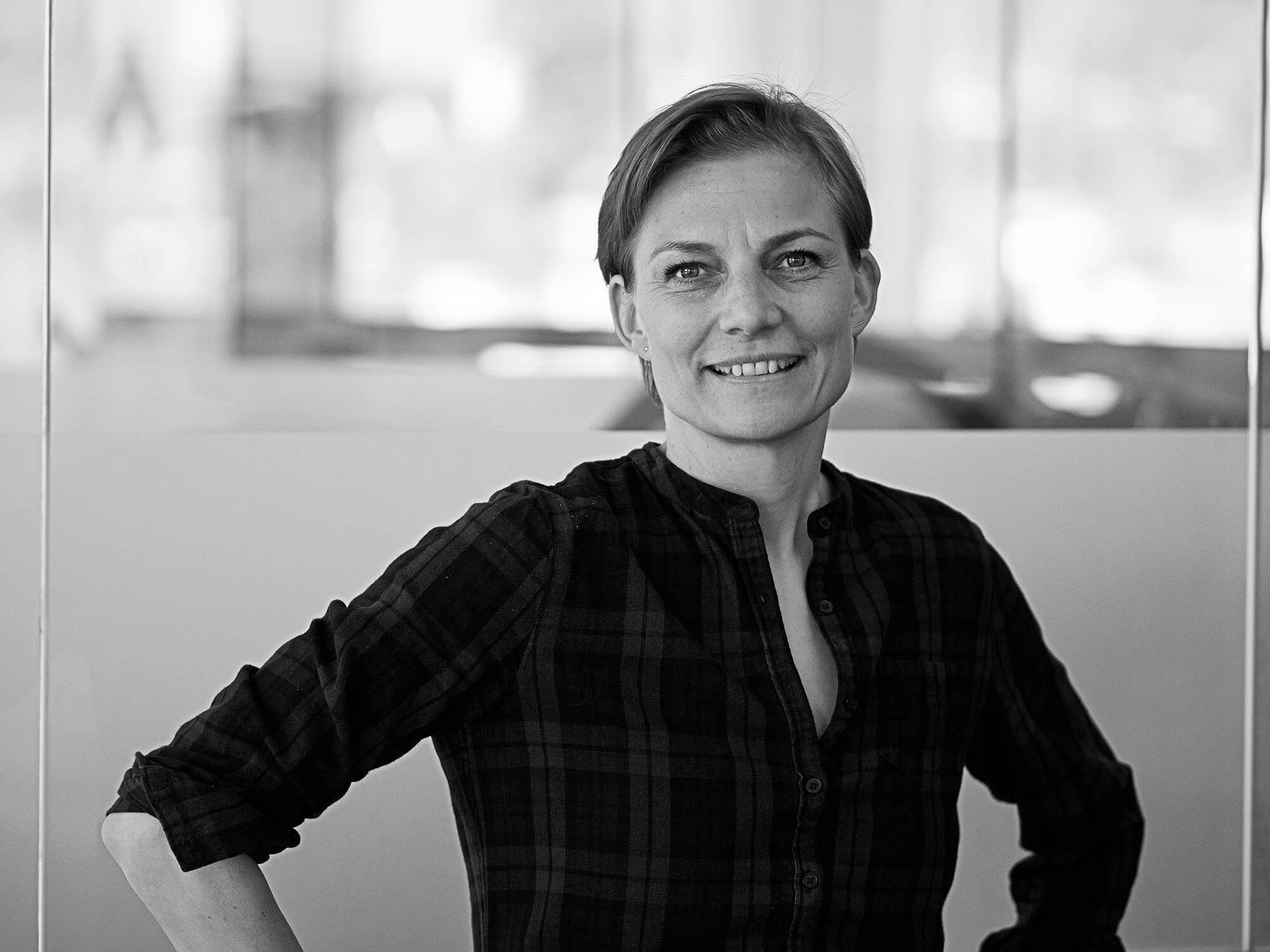 For decades, architecture and the architect have had opportunities to steer ways of life toward a more sustainable path. This is precisely what the firm Nordic – Office of Architecture strives for. More than a company, the architecture office is a community with a culture of beautiful and outstanding architecture, a culture powered by commitment. The design that results is based on a long-term approach to each building, with sustainable and durable materials – such as Lunawood Thermowood.

What lies behind the approach to Nursery Savannen

Sofie Peschardt is the Architect behind the Nursery Savannen design. ‘For me, good and sustainable architecture is about working in a visionary and responsible way. Always based on context, with strong local anchoring. I believe that, through quality architecture, our profession at its best contributes to a sustainable environment in which the buildings we create have a long life and generously give back to their local surroundings. The detailing we do and the materials are always carefully chosen for their ability to patinate and stand the test of time,’ explains Peschardt, a partner with Nordic – Office of Architecture. 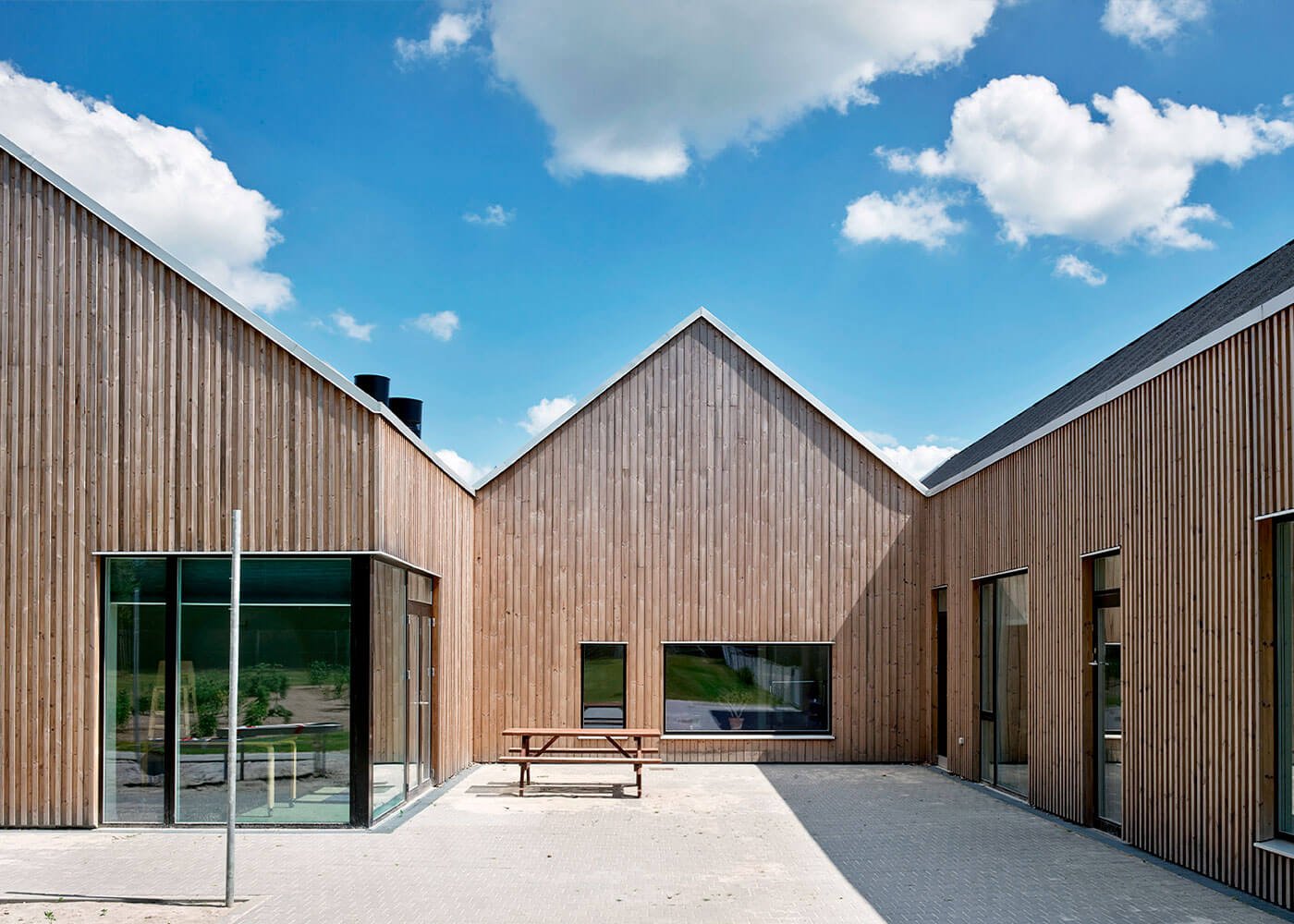 The office always turns to local materials, scale, and building traditions in its sketching for a new project. Often, local materials are chosen for the projects, such as wood. Peschardt explains: ‘Wood is an exciting material that offers many possibilities. It has numerous varieties and qualities. A material such as Lunawood Thermowood is a good and durable building material that patinates beautifully and provides a wonderful smell as a side effect.’

She continues: ‘We designed Savannen Nursery with high architectural aims. For the façades, we wanted a material that would yield a lovely patina and present minimal maintenance demands. We wanted warm, friendly, “touchable” façades for the little kids. In addition, we wanted to give each “house” – each nursery space – a distinct identity and scale. We achieved all of this by using well‑differentiated wood panelling with Lunawood Thermowood.’ 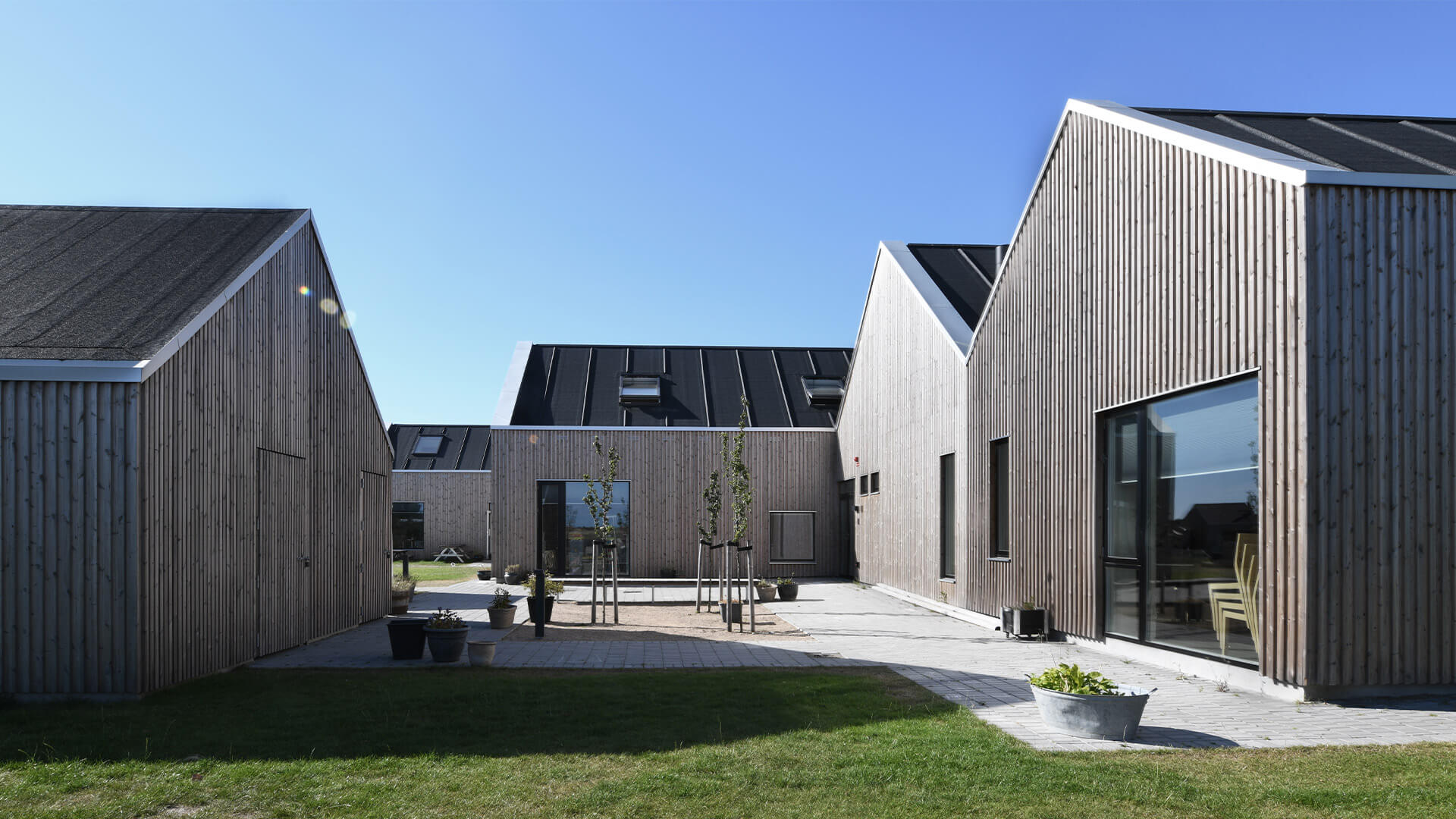 The case of Savannen Nursery

The vision, 2017–2019:
The architectural vision for Savannen Nursery was based on the inherent qualities of the area and the surrounding landscape, for both the design and the use of building materials. In line with this vision, the implementation integrated sustainable solutions into the construction – they became a natural part of it, inside and outside. The carefully chosen solutions created noticeable added value in day-to-day life and ensured that the nursery would be a robust and reliable space that supports holistic balance among the potential of the surrounding village, the programme, architecture, aesthetics, and the education philosophy for the facility.

Central to the vision was the aim of creating a bright and friendly structure, with exciting spatial solutions and using outdoor areas that lie along natural extensions from the interior, the outdoors being just as important as the interior spaces in creating good conditions for children and staff alike. Furthermore, it allows for creating recreation spaces for the locals’ use after nursery hours.

The site:
The plot is in a border zone between town and country. It is flanked to the north by the main road leading to Frederikssund, and the site has a strong visual connection to the village school. On the western edge of the site is a small forest, and to the south rests a small lake surrounded by a green area. Looking to the east, one has an uninterrupted view of fields and farmland. 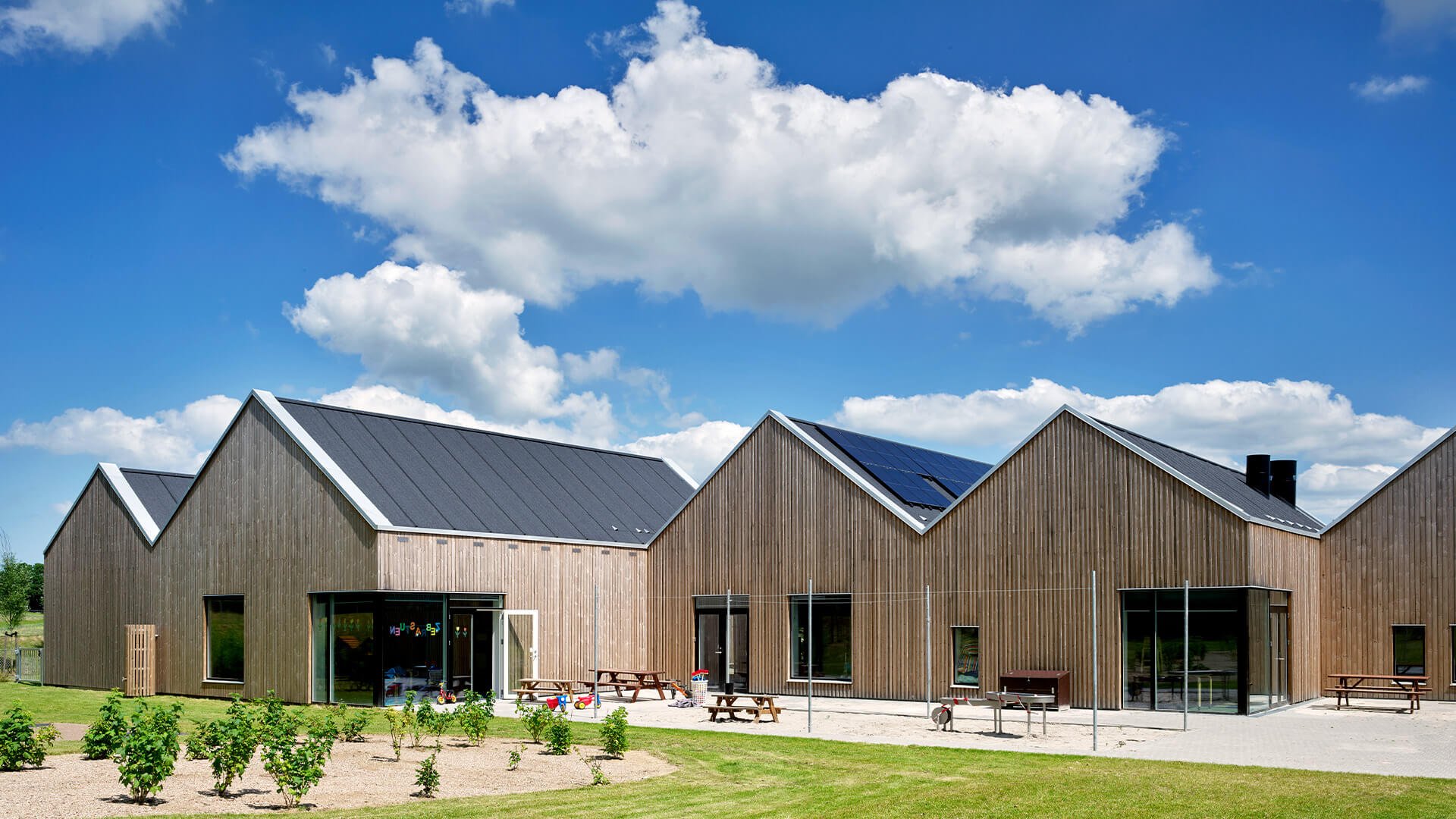 Space types and their design:
The children’s space engages with its context through the use and composition of recognisable elements from the housing styles of the village, such as the saddle roof and the longhouse structure.

The design of the nursery is rooted in the qualities inherent to the area and the grounds, alongside a desire to create rooms with optimal conditions for the children’s development. The architectural concept entails downscaling the traditional longhouse by dividing the space into smaller ones arranged into clusters of mini-houses. The aim is to offer the children great variety in the smaller spaces, both inside and out.

The heart motif:
Each main room, or ‘heart room’, forms the heart of social interaction with a particular purpose and intention. The building has several heart rooms, for children and adults, each with a distinct identity. The largest heart is found in the common room, a central space from which one moves outward to the smaller group-use and activity rooms, eventually finding the way to a seat in a niche beside one of the structure’s windows.

Materials:
For the façades, the architects wanted a material that patinates beautifully and has the lowest maintenance demands possible. They wanted the façades to be warm, friendly, and ‘touchable’ for the children. Furthermore, they strove to give each ‘house’ its own identity and scale. According to Peschardt, they achieved all of this by means of differentiated wood panelling with Lunawood Thermowood. 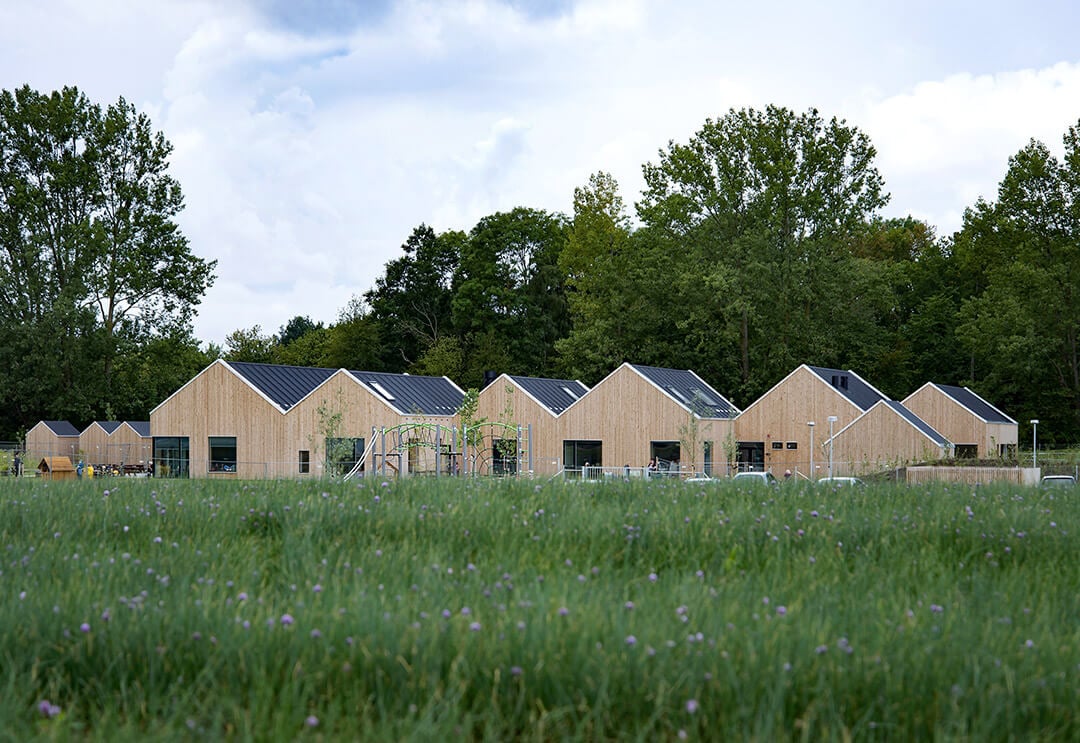 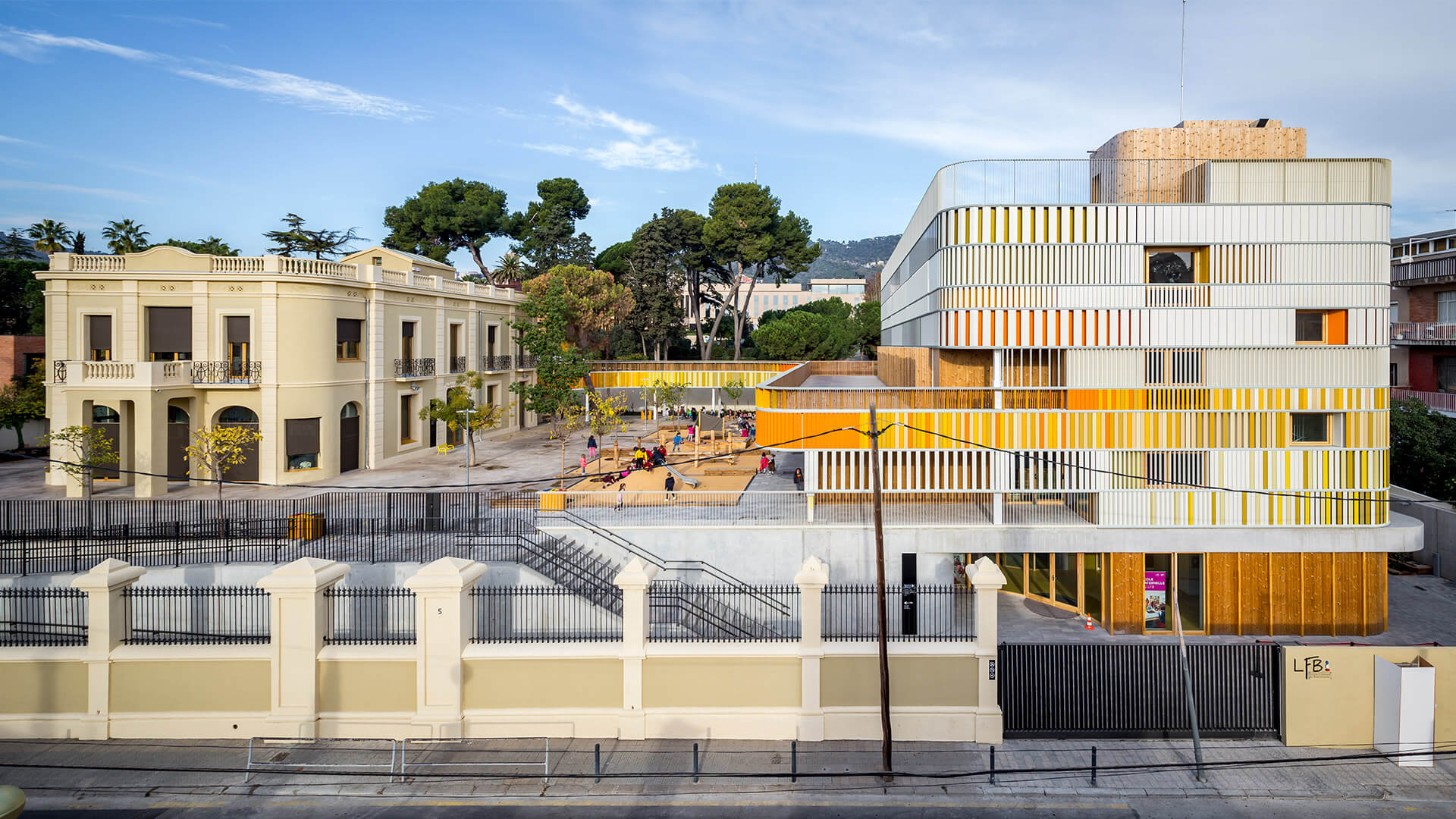 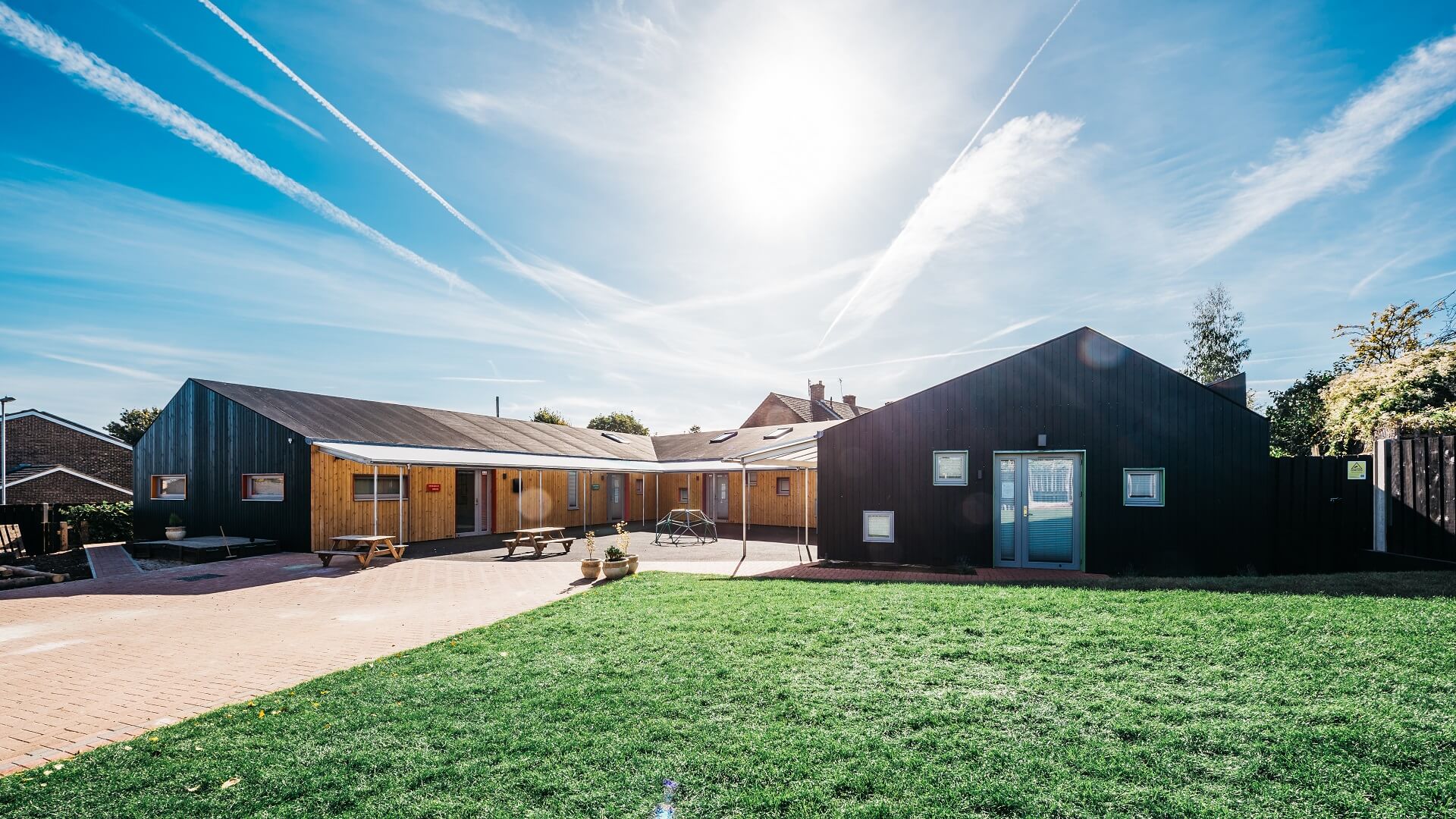